DTC in 41-year-long battle over 5-paise loss|
NEW DELHI: Delhi Transport Corporation incurs a loss of about Rs 1,000 crore annually. Its rickety and unreliable fleet is an embarrassment for the capital. Yet, in a bizarre instance of enforcing accountability and making one pay, it has been fighting a case against a former employee for causing it a loss of five paise, 41 years ago! It is anybody's guess how much the corporation has spent from the public exchequer in keeping the man, who is now 70, down.  The man at the receiving end is Ranvir Singh, a conductor, who faced a flying squad of ticket-checkers in 1973 in a bus going towards Mayapuri. The overzealous checkers found that he had charged a woman passenger only 10 paise for a trip when the actual fare was 15 paise. Singh realized the enormity of this lapse when the squad decided that he had cheated the corporation and had been negligent.

A departmental inquiry was conducted and the verdict delivered. Singh was found guilty of causing a loss of 5 paise to the public exchequer and his summary dismissal from service was ordered in 1976 on the grounds that he was a repeat offender.

Singh challenged the DTC decision before a labour court, arguing he had been victimized.


The court ruled in his favour in 1990, directing DTC to reinstate him with full wages. It found the punishment handed out by DTC disproportionate to the "crime". 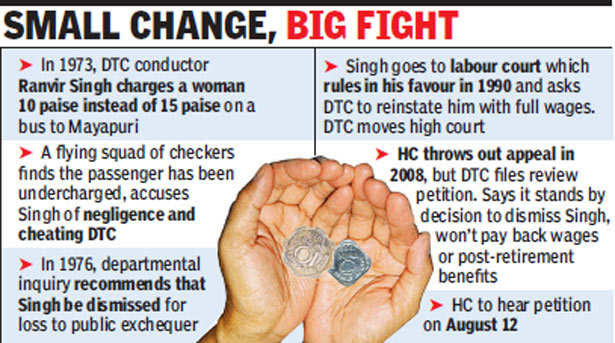 But the transport body was unrelenting. Instead of honouring the labour court verdict, it decided to approach the Delhi high court in appeal. It maintained before the HC that no leniency can be shown to an employee who cheats the government of revenue, and urged the court to uphold its probe panel's decision. However, it got no sympathy from the HC which threw out its appeal in 2008, nearly two decades later. While Singh demanded post-retirement benefits and back wages, DTC continued to oppose any relief. After suffering a setback before the HC, the corporation chose to appeal once again, this time by way of a review petition before Justice Hima Kohli. Arguing that an employee who cheated the government can't be allowed to go scot-free, DTC has in the process spent much more and forced Singh to do the same. It is also challenging Singh's demand for back wages though the latter has got some partial relief. Claiming that Singh's past record contains adverse entries, the corporation has accused him of allowing ticketless travel to several passengers and justified his sacking.

In its latest affidavit filed before Justice Kohli, DTC has indicated its resolve to punish him. Filed through standing counsel Sumeet Pushkarna, the affidavit informs the HC that the corporation stands by its decision to dismiss Singh and won't give him back wages. The HC will take a call on Singh's fate on August 12, when it considers DTC's affidavit and review petition.